The story of one girl with extraordinary abilities who changes the face of her world as she knows it. 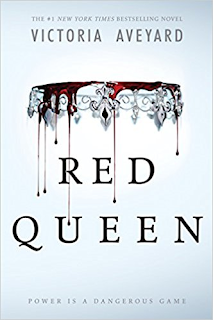 " Power is a dangerous game "


These are the words that grace the cover of this book. These are the words you should pay attention to. While most books show a revolution that was bound to happen so long as it had a catalyst to spark its flames, this book gives us an unwilling hero who is doing what she can to protect her loved ones and SURVIVE.

Meet Mare Barrow, a young girl in a town called the stilts where rich is a foreign concept and extreme poverty is the norm. Her life consists of pick-pocketing whatever fool leaves their money unguarded on the streets and waiting for the day till she turns eighteen and is conscripted into the military.
Her life is generally unremarkable until she is forced to become more when a freak accident that should have killed her reveals powers that she never knew she possessed. To make matters worse, these powers are revealed in front of the entire royal family as well as most of the court in her homeland of Norta.
In this world, Mare is an anomaly. The only people who have powers are those with silver blood, which allows them to rule over the red blooded people who sadly are without gifts of any particular interest except manual labor. Mare has red blood and powers as strong as the silvers. Do you see the problem? She is an anomaly who needs to be covered up quickly by the royal family because what better hope for the reds than someone who shares their blood, but is as strong as their tyrants?
Soon a coverup is in place and Mare is pretending to be the lost heir to a nearly forgotten house in the ruling court. Thrust inside a world she never thought would exist in her life, she must learn to survive for the sake of herself as well as her family.

" Anyone can betray anyone "

Anyone can betray anyone is the primary statement needed to understand this book. Despite the fact that Mare forms friendships and gains new enemies during the course of her stay in Whitefire Palace, she soon learns that trust is easily placed in the wrong hands. Especially when a rebellion makes contact with her in the hopes that she can be the hope for reds who have none.

Now, I don't want to spoil anything else for you because this is honestly one of my favorite books that I have had the pleasure of reading. I'm not joking. I had to physically stop myself from reading more times than I would care to admit and when  was done I wanted nothing more than to read the next book in the series. The author does a superb job of character development and it feels truly fresh in a world where people chase the cliché with a sort of reckless abandon. I fell in love with these characters and I shared their journey with my full heart and soul. There pain was my pain and their love was my love. I cannot say enough wonderful things about this book or this series as a whole. The only thing I can say is that you should read it immediately.